The Faces of Grimsby Ford in the Community 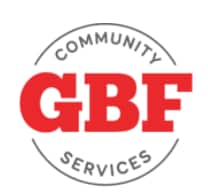 GIVING BACK TO THE COMMUNITY - Grimsby Benevolent Fund

For the past few weeks Grimsby Ford has been Christmas shopping for three families in the community to help give back this Holiday Season. With the help of our staff we got it done and wrapped and now ready for delivery! We met with our good friends at the Grimsby Benevolent Fund to deliver all the gifts! We hope we can continue to bring Holiday Spirit and #GiveBack to not only these very special families but also to our Grimsby Community. 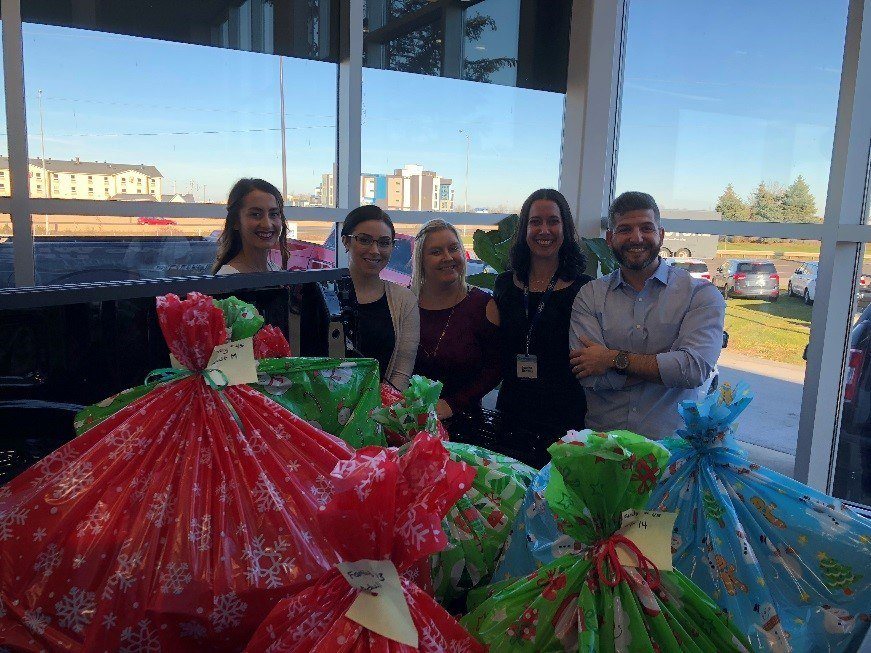 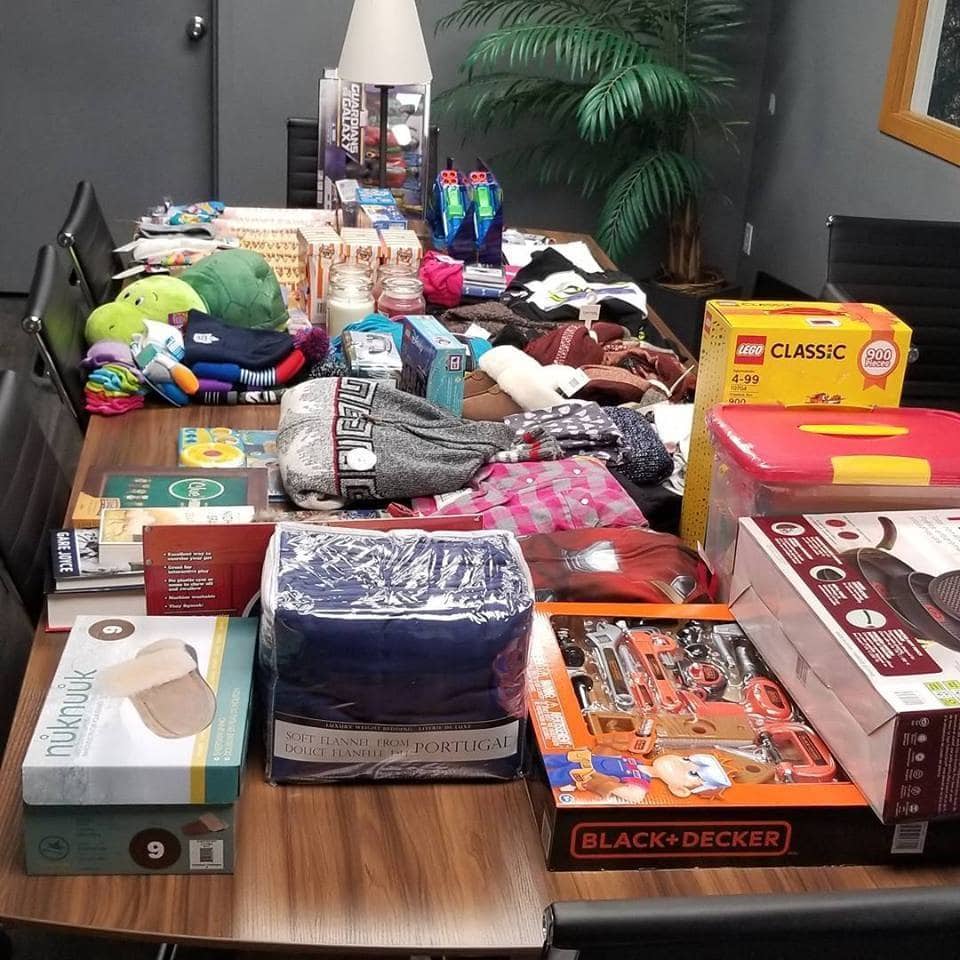 Joanne Bezeau and Laura Martin of Grimsby Ford, with the help of staff and student council members from Our Lady of Fatima Catholic Elementary School in Grimsby, filled up the back of a pickup with donations from the school as part of the WE Scare Hunger campaign. The school collected more than 800 non-perishable food items during a week-long campaign that started on Oct. 31, in support of the GBF Community Services. The team from Grimsby Ford also donated $350 worth of items to the campaign, as Ford is a sponsor of WE Day and a partner of WE Schools.

Grimsby Ford has often been partnered with The Grimsby Community Services which is a valuable part of our community. 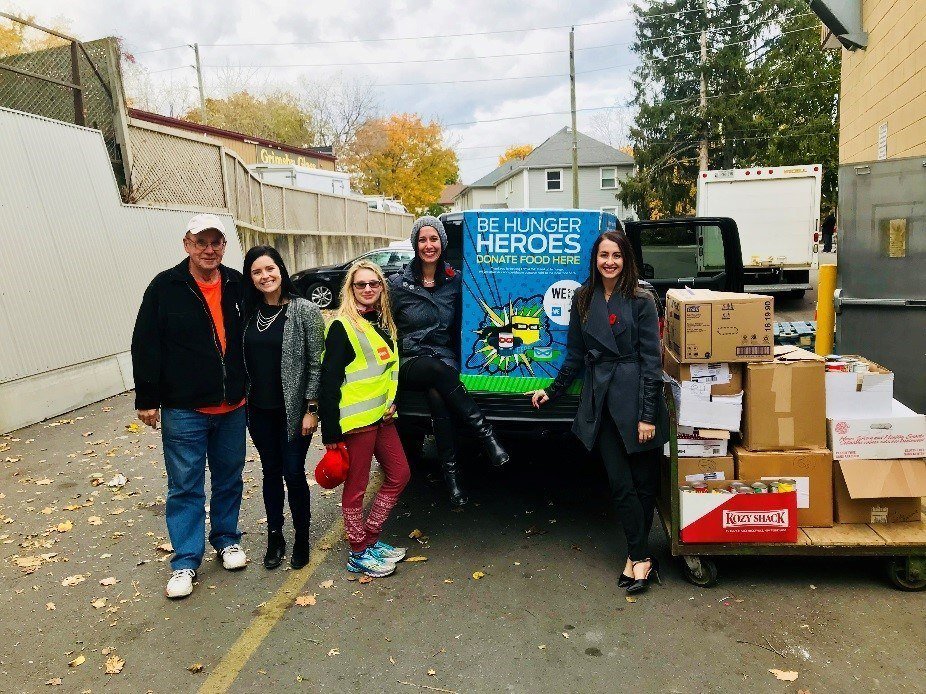 Our Lady of Fatima - WE SCARE HUNGER

The student council at Our Lady of Fatima School had a goal - one canned good per student - which would have been 560. What they got in their Be Hunger Heroes food drive was 820 items. Event partners for the fourth straight year, Grimsby Ford, also collected donations and made the delivery of all goods to Grimsby Benevolent Fund last week.

The Astronomy in Action show is an interactive, comedic and educational presentation with lots of energy and discussion about the newest, coolest, and most fascinating topics the world of astronomy has to offer. With lots of visual demonstrations and audience participation, this is the show for everyone ages 5+! Many thanks to Grimsby Ford for sponsoring this exciting Astronomy in Action presentation. They're out of this world! 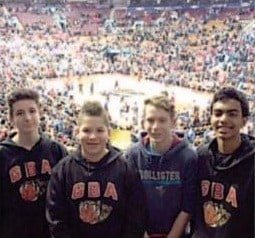 A group of Grimsby Basketball Association players got a chance to take in a Raptors 905 game thanks to Grimsby Ford. Ford has an ongoing partnership with the Raptors organization and hosted a promotion for local youth to take in a game. Jacob Baker, Carter Donegan, Colin Brillinger and Dashiel Baktawar were among those on hand.

Students at Grimsby Secondary School, in partnership with Grimsby Ford took part in the We Scare Hunger Campaign, which was a Halloween Food Drive for the Grimsby Benevolent Fund. Grimsby Ford donated $500 towards the cause. Photos show students loading up the food they collected for the campaign. Some participants above include Grimsby Secondary School Students Zakeri McDonnell (16), Sifa Lwesso (14), Chloe Sloan (18), Ethan Schnack (15), Grimsby Ford Sales Consultant Daniel Davies and Sales Manager Joanne Bezeau. 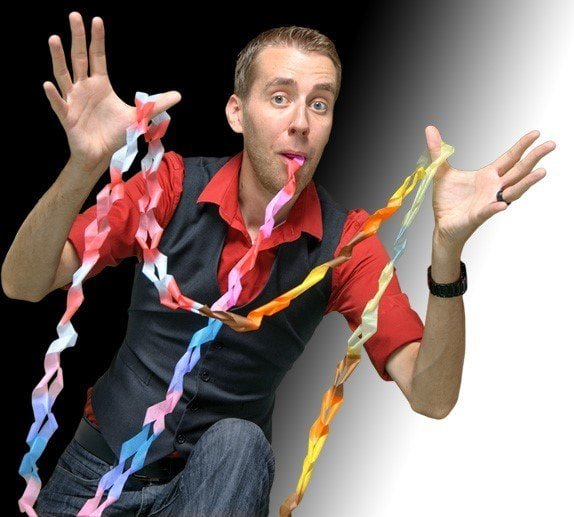 Give your spell book a quick read ahead of Aug. 10.

That's because Niagara magician IncrediBrent will be stopping by the Grimsby Public Library, offering his high-energy, interactive magic show. Offering a blend of comedy magic for young and old. IncrediBrent has appeared on television and on the Disney Cruise Line, as well as shows around the Niagara Region.

The event is part of the library's summer reading programs. IncrediBrent's performance is free to attend, thanks to sponsorship from Grimsby Ford.

Magician IncrediBrent will be stopping by the Grimsby

Public Library on August 10th as part of the library's

One of our Sales Professionals Rick Allen, brought a new 2016 Ford F150 to St. Andrews Pre-School for Career Day.

I think it is safe to say the kids enjoyed the big truck - but who wouldn't!

Thanks Rick, I hope we have some future Ford Sales Employees in this photo!

For the Third Year in a Row, Grimsby Ford was the Titleist Sponsor for the Annual Charity Golf Tournament for the Grimsby & District Chamber of Commerce. 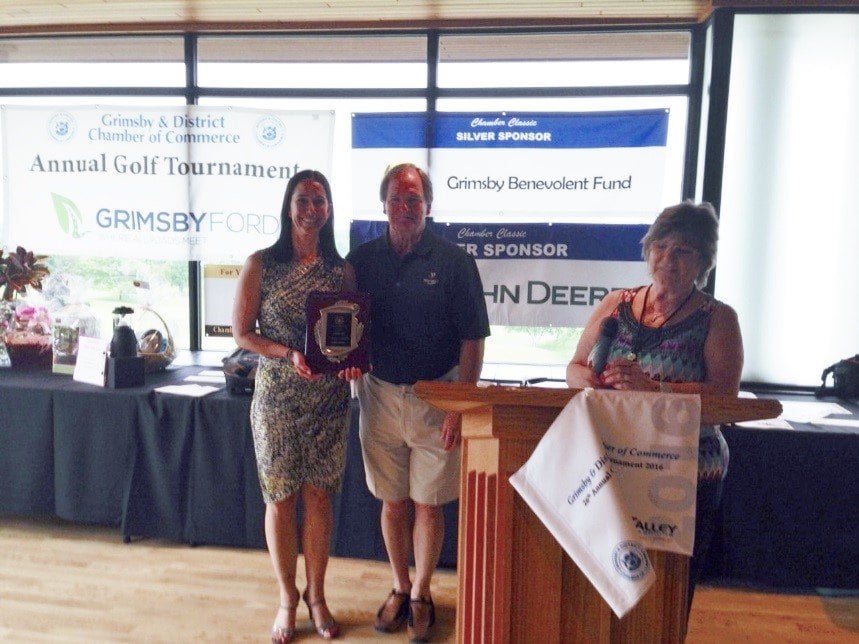 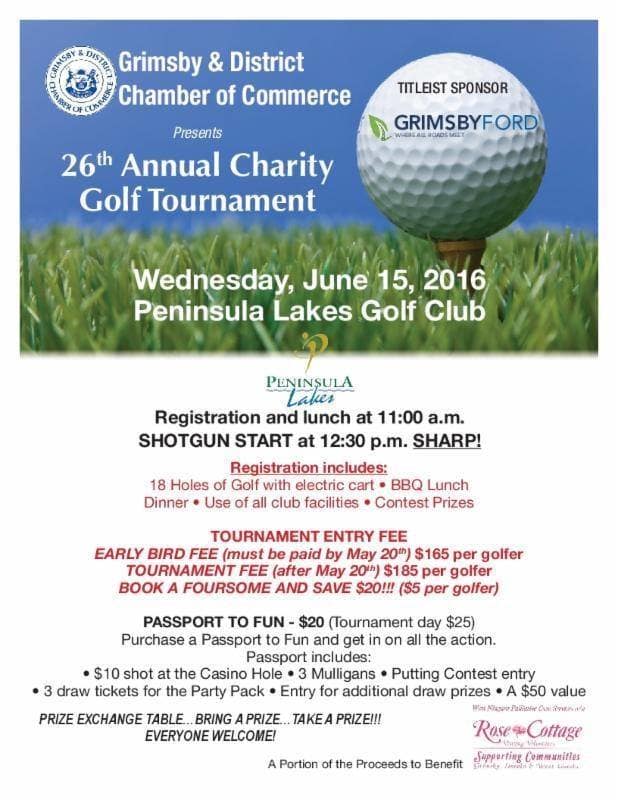 Grimsby Ford received a surprise from Tim Hortons on November 16th 2015. Our lucky Sales Professional Rick Allen's daughter was asked if she could do a good deed for someone in the community, and this is what she said "Well my daddy is working late tonight and I would like to send him coffee and timbits".‪ #warmwishes‬‬‬‬‬

What a sweet moment! Thanks Tim Hortons!

Check out the Tim Hortons Warm Wishes Commercial here at: 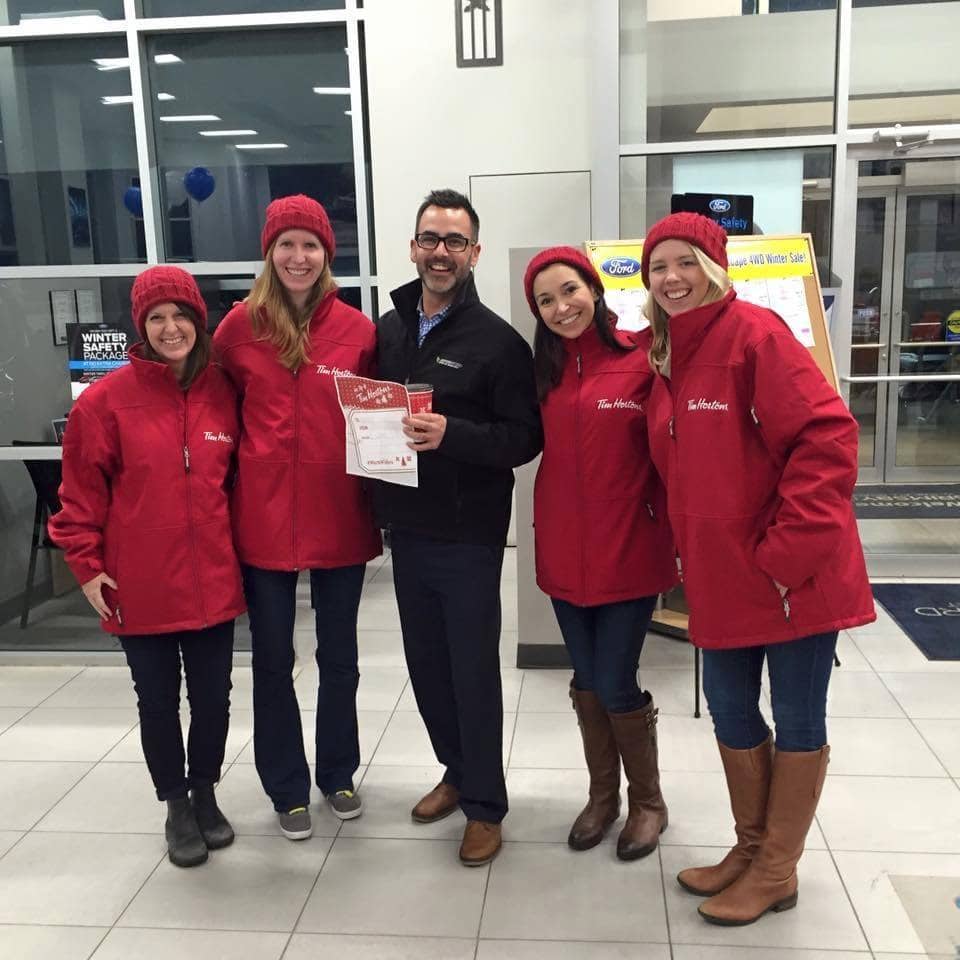 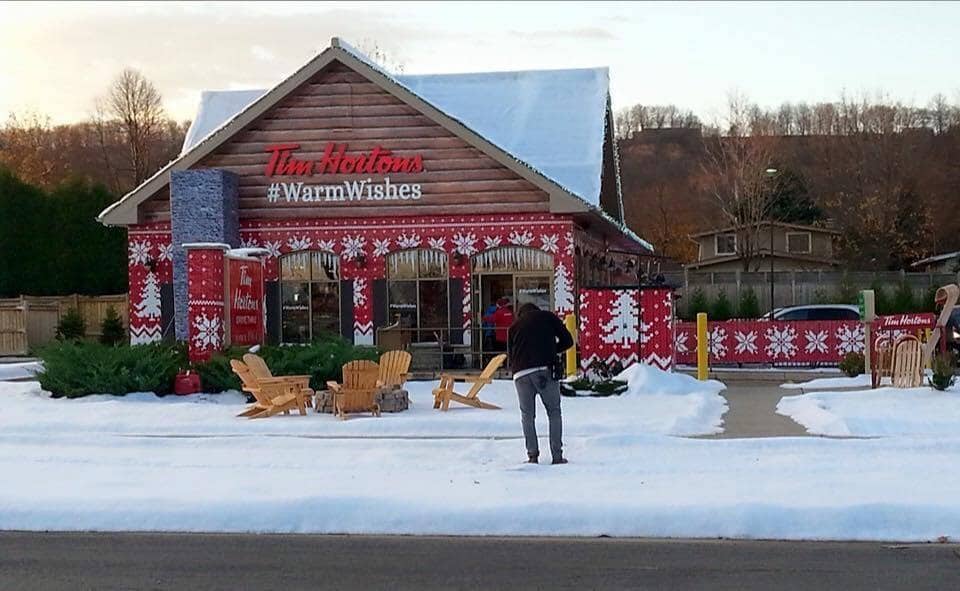 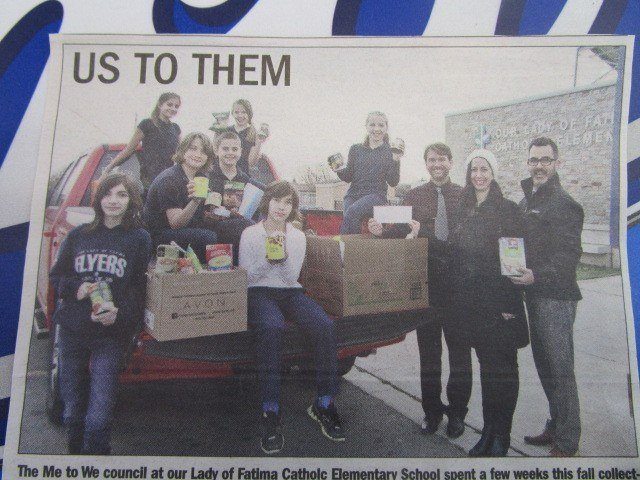 Our Lady of Fatima Catholic Elementary School - "We Scare Hunger"

The Me to We council at our Lady of Fatima Catholic Elementary School spent a few weeks this fall collecting food for We Scare Hunger, an effort by Grimsby Ford that encourages schools to donate non-perishable food items to a local food bank.

This will be continuing for all our listeners, so make sure you listen out for Grimsby Ford hitting the airwaves daily on KX 94.7

The Grimsby Public Library hosted a musical family event with the "Turkey Rhubarb Concert" on August 19thsup> 2015. Grimsby Ford helped sponsor the musical family and their visit to the Library.

We enjoyed some favourite songs such as: The Eensy Weensy Spider, Old MacDonald, The Butterfly Song, Teddy Bears' Picnic, and the Green Grass Grew All Around.

Thank you for the great entertainment! 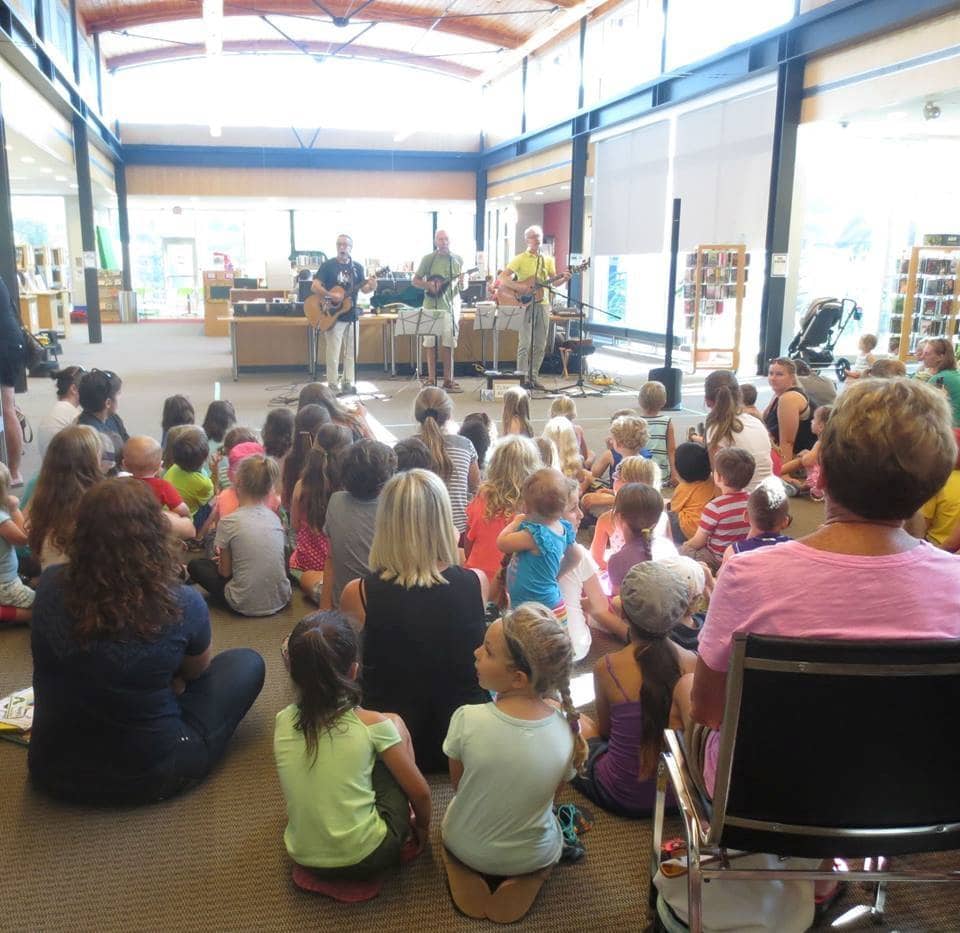 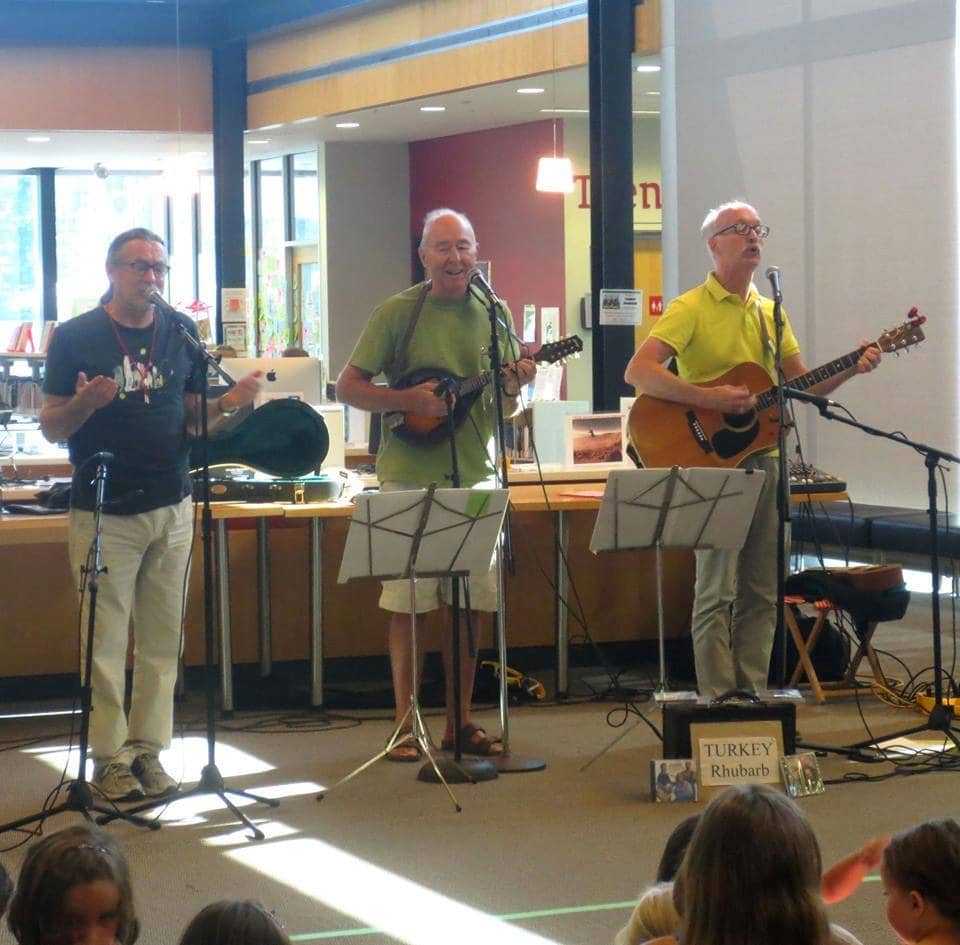 Thank you everyone for your support and making this possible for Grimsby Ford! 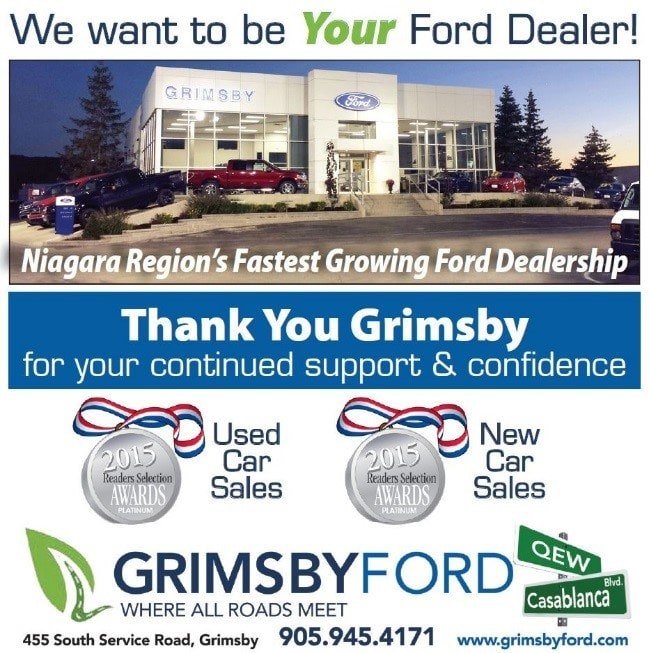 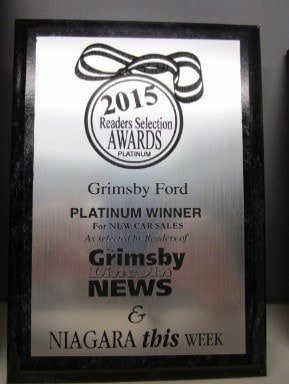 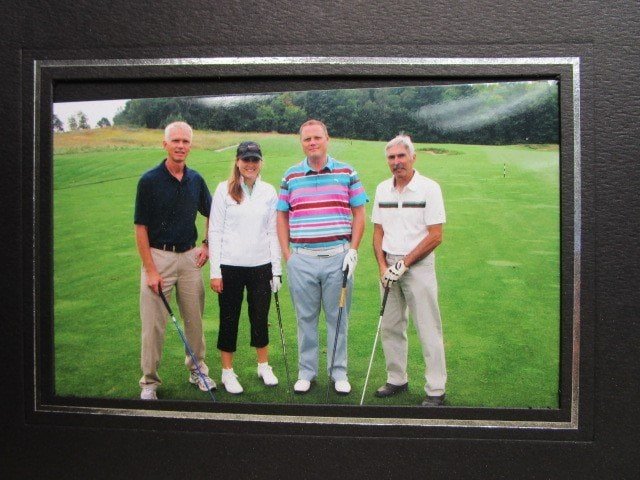 We participated in the Annual Charity Golf Tournament with the Grimsby & District Chamber of Commerce. Grimsby Ford once again as the Titleist Sponsor for the Tournament.

It was a great day for golfing! 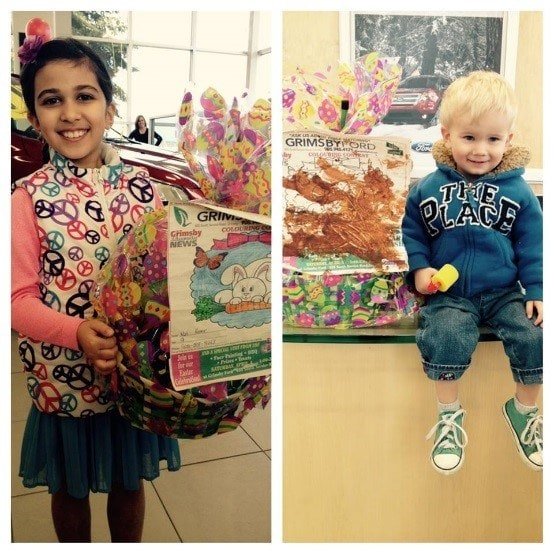 Grimsby Ford hosted an Easter Celebration with a Special Guest from the Easter Bunny on April 4th 2015. We held a BBQ, offered face painting, prizes and Easter Treats.

Along with the celebration, we held a colouring contest for children to participate and bring their best colouring page to the dealership, and the winner would win a Special Prize! Pictured here are a couple of the amazing winners!

Thank you to all the children who participated in the colouring challenge - you guys did great! 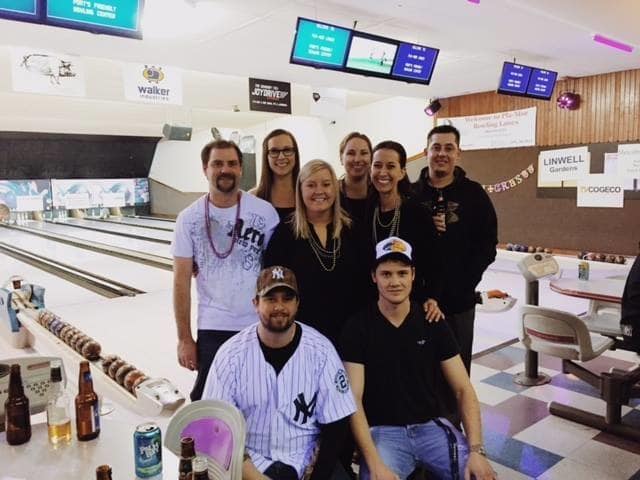 I do believe we had a Boys vs. Girls Bowling Challenge.. and the girls won! Way to Go!

"Every dollar you raise helps match kids with a mentor. Research shows that children who have been mentored have higher self-esteem and are more likely to stay in school - empowering them to succeed, give back and realize their true potential". 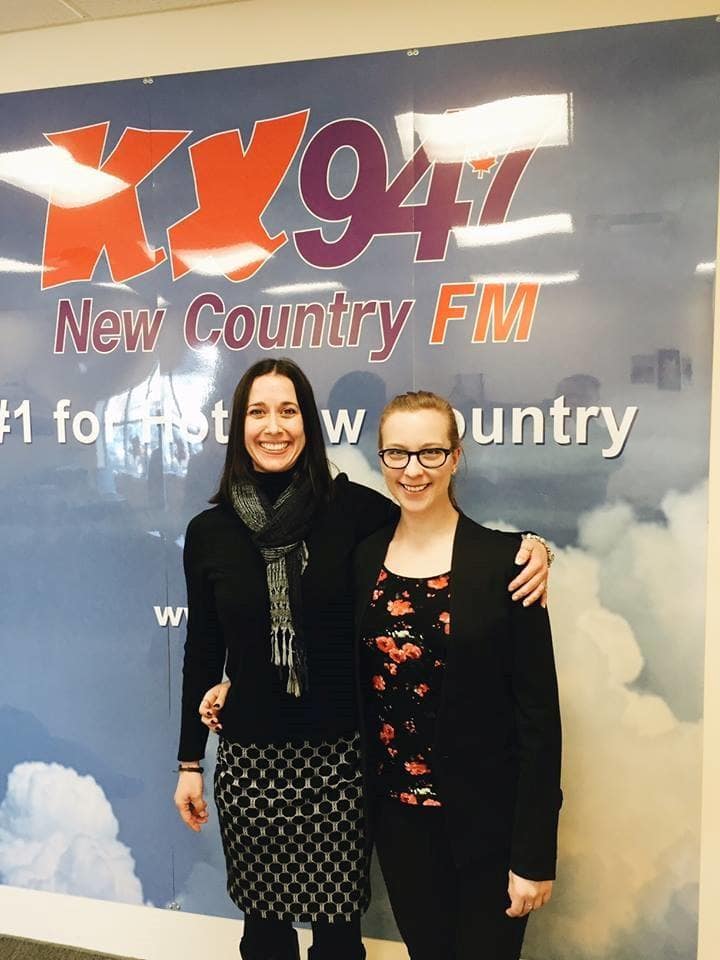 I'm sure you've all heard the voice of our Sales Manager, Joanne Bezeau on KX 94.7 New Country with our Monthly Sales Promos!

This will be continuing for all our listeners, so make sure you listen out for Grimsby Ford hitting the airwaves daily on KX 94.7. 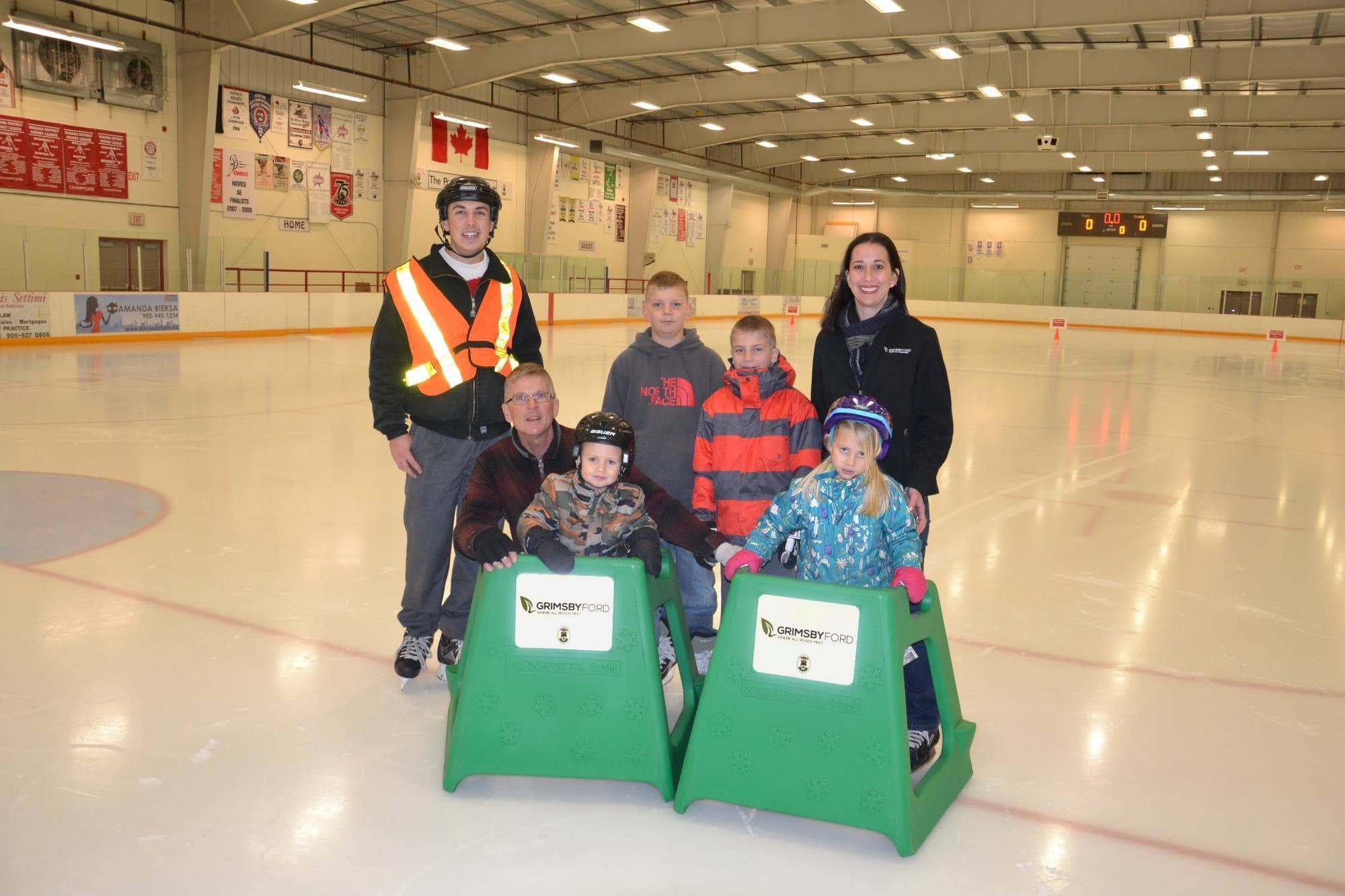 "The older versions just don't stand up to the use that they get over time, particularly as we see older children using them to learn to stake," said Sarah Sweeney of Grimsby Recreation Services. Grimsby Ford saw the value in this purchase, and agreed to sponsor the ice scooters.

"Grimsby Ford is happy to be involved with young families in our community and assisting beginners learning to skate safely and confidently," says Bob Clark of Grimsby Ford. The ice scooters are much larger than the older versions and they are heavier.

For open public skates the Peach King Centre sections off an area of ice for beginners and learners. The ice scooters will also be available during the Holiday Skates in December.

Thank you Joanne for representing Grimsby Ford during the release of the brand new "Ice Scooters".

We volunteered and raise money for Hospice Niagara's community programs and the Stabler Centre Residence through a Holiday Gift Wrap in November 2014.

"Thank you to all who participated in making the 2014 Holiday Gift Wrap Fundraiser at the Pen Centre a success. This event was possible with the support of our generous volunteers". 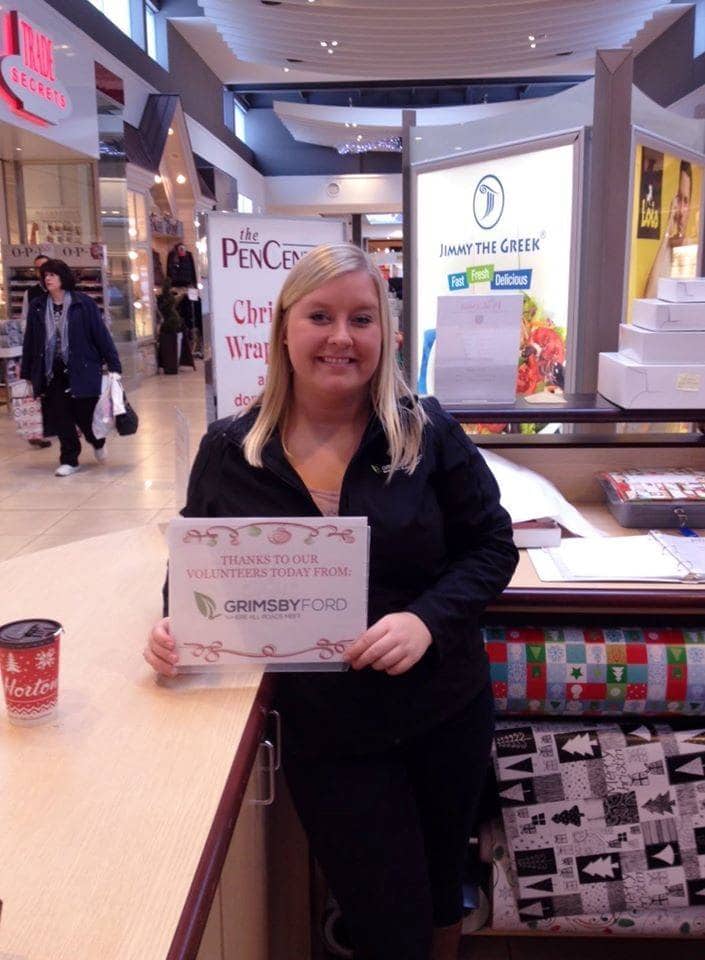 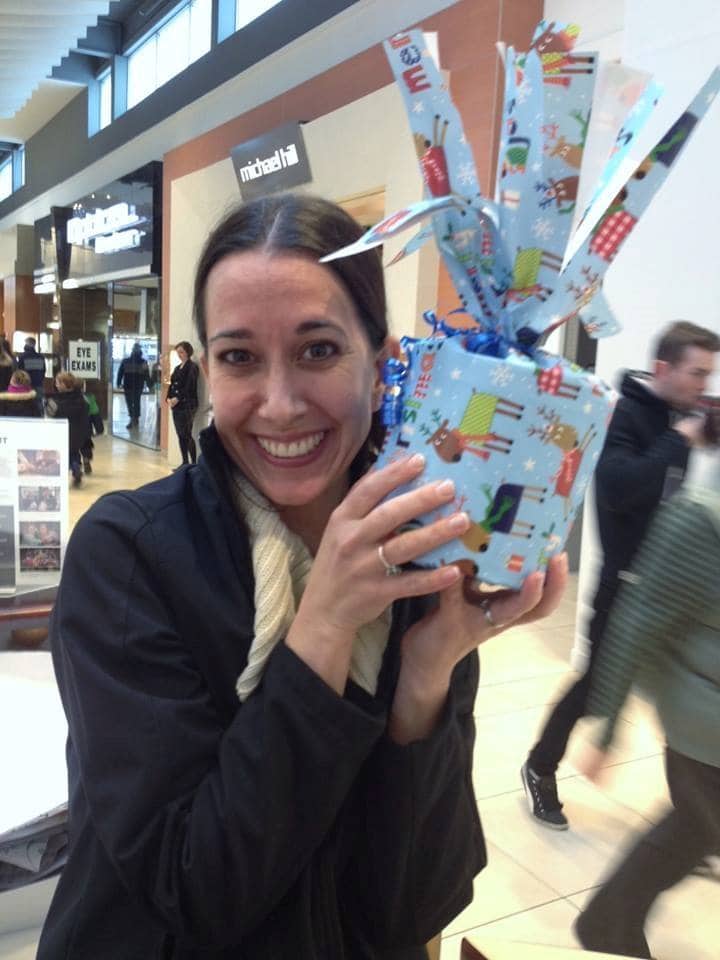 Since becoming Grimsby Ford, this was our very first recognition for being an Award Winning Dealership.
We received a Gold Medal for Used Car Sales and Diamond Medal for New Car Sales.
Thank you for the support!

This was the First Year Grimsby Ford participated in the Annual Golf Tournament with the Grimsby & District Chamber of Commerce. Grimsby Ford was also named the Titleist Sponsor for the tournament. 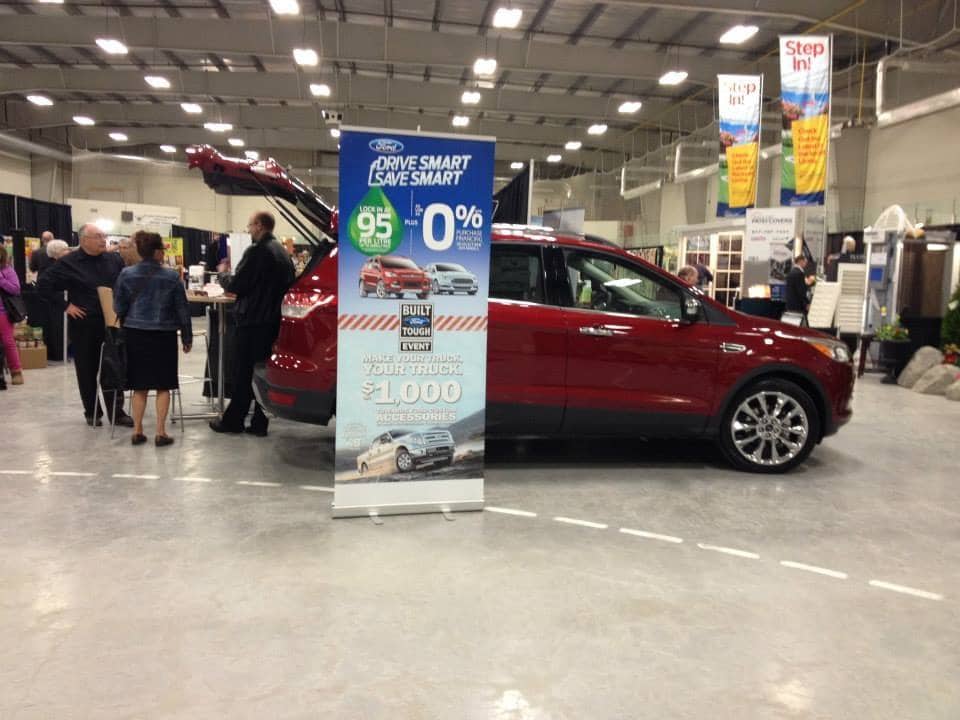 Grimsby Ford participated in the Niagara Home and Garden Show which took place at the Peach King Centre in Grimsby on Friday and Saturday in April 2014. Admission was free and we had a lot of great feedback!

Clint, one of our Sales Professionals enjoyed talking about the new Ford Escape. 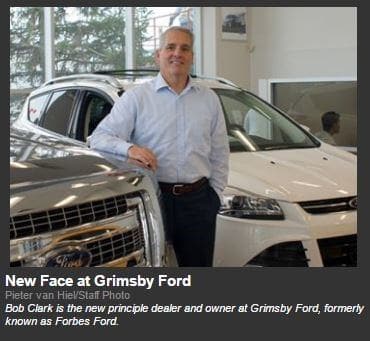 For almost 30 years, when residents of west Niagara wanted a Ford automobile, they went to Forbes Ford and talked to Stephen Smalley. Smalley was principal dealer at the dealership, taking over from his father Moore Smalley. Moore started the dealership in 1984 in the heart of Grimsby. The business moved to its current location at 455 South Service Rd. in 1997.

Through the years the father and son team built a rapport with their customers, as well as their community. They were long-time supporters of West Lincoln Memorial Hospital, local high school co-op programs and bursaries, the Fergie Jenkins Foundation, Grimsby Benevolent Fun and much more. In August, Forbes Ford took on a new name - Grimsby Ford - and a new owner, but the dealership will remain committed to the service of clients and community. Bob Clark took over as principal dealer and owner on August 17, but he is certainly not new to the automotive industry. Clark was born to the trade, he says.

"I was born and raised in the auto industry. I was actually raised in Windsor, and my dad worked for one of the domestic manufacturers. Call it destiny," said Clark.

After graduating from university, Clark spent 20 years working for an auto manufacturer in Alberta. When he left that career, he was a senior executive in the company, serving as vice-president of sales, service and parts. He bought into a dealer group in Edmonton, and was part of the team that brought the group public. The dealer group became AutoCanada, the only public dealer group in the country.

"I was the president of AutoCanada for seven years before I made the decision to come back home to Ontario," said Clark.

Clark said he was excited at the chance to both return to Ontario and to represent the Ford brand.

"Ford is one of the strongest brands in the automotive spectrum, globally speaking, so we're excited. We heard of the opportunity here in Grimsby and it didn't take more than two seconds to make the phone call," he said. "It's a wonderful area. I wanted to be in a small community where I could build a reputation with your name."

Clark said he intends to continue the tradition of community engagement and customer service built by the Smalley family.

"We're going to be all about service and doing what is right. Word of mouth is going to be critical," said Clark. "We've got a really good team here… we're going to take it to a new level to engagement the community."